This bay houses a large collection of horticultural machinery including cultivators, an orchard sprayer, lawn mowers and other equipment. 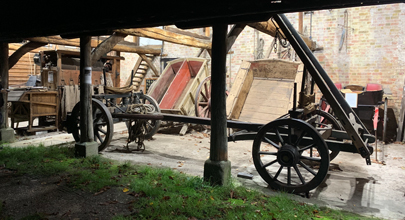 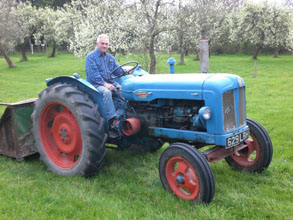 These now house the collection of farm carts that were used for transporting virtually anything on the farm to and from the surrounding fields. One of the carts is a lightweight used for personal transport whilst another was used for removing the waste from the Privy’s in the village of Mentmore (called the Mentmore night soil cart) before sewers were built. Carts always have two wheels whilst Wagons have four.

These bays until recently housed some of our Tractors, which have now been returned to the Tractor Sheds located off the Sheep Yard. One exception is our workhouse around the farm the Fordson Major which can often be seen mowing the Orchards. 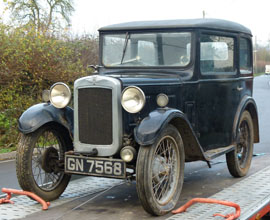 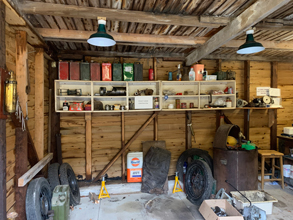 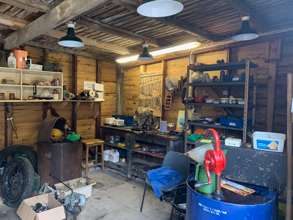 Our new exhibit the Vintage Garage is home to our recently acquired Austin Seven. The Austin is currently undergoing an engine rebuild in the garage.

At the entrance to the Cart Sheds Yard from the Rick Yard you pass by the Grain Drying Silos. 1946 was a bad weather year and they were still getting in the harvest in November. World War II was over but the country was on its knees. Everything was in short supply. Despite this there were big changes made in time for the 1947 harvest at Pitstone Green Farm.

The Askham Bryan Institute, during the grain bin ventilation experiments of 1946, had produced a design for a state of the art grain drying plant and were looking for a 'guinea pig' farm to try this out. Jeff Hawkins was the farmer and owner of Pitstone Green Farm and carried out the building of this plant. The view you see in the picture is the side view of the silos taken before the present wireless & science room (originally brick grain bins) were built. He built the silos and associated plant and demonstrated that the design was a success.

Raw materials for construction were in very short supply, but Jeff had one advantage in that bulk cement was being manufactured literally just across the road at Pitstone Cement Works. The silos (correctly termed Ventilated Drying Bins) are made of reinforced concrete. The concrete supply was assured, but what of the reinforcement, steel was only available for high priority uses in 1947.

Large quantities of flexible steel mesh had been made during the war to spread over soft sand in the desert for heavy vehicles and tanks to pass. Stockpiles of this were now surplus. A sufficient quantity was obtained and, along with some standard reinforcing bars, erected to form the walls of the silos. These were then trowelled by hand with concrete, inside and outside, in three stages. The result is was six silos (two more were added at a later date), which are very strong, despite walls only a few inches thick.

Jeff and his farm workers, along with hired bricklayers, built the silos with their own labour, contractors came in to erect the roof later. A new electricity supply was brought in to power the fans and the heaters to blow warmed air through the silos when they were filled with damp grain.

These silos were not just a grain drying and storage plant. They formed a part of a complete grain drying-handling-milling-mixing-bagging plant with emphasis on minimising labour and they were the product of Jeff's fertile mind. Grain was moved around the area in several ways. Augers are like giant corkscrews, rotating inside close fitting pipes; put the end of the pipe into a bin of grain and start the screw rotating in the right direction and the grain will move along the pipe. With a blast of air grain can be blown through a pipe for a considerable distance. An endless belt fitted with small buckets can elevate the grain from a low container to a higher one. All of these methods were used here.

A grain storage silo now houses a fully restored Stone Mill donated by the Chiltern Society from Lacey Green Windmill. Originally the mill had two 4 ft diameter stones mounted on the vertical shaft but due to deterioration of the stones, we have made a lightweight dummy top stone, so that the mill can be made to turn.