The so called Chicken Yard still has the chicken shed complete with chickens. The following exhibitions are accessible from this area.

First opened in the year 2000 the shop houses the complete collection of printing equipment that belonged to the late Mr. Hudgell. Mr. Hudgell had a small business printing trade and other cards for the local community. There is a fine Arab printing press circa 1890 and a small Adana press together with a vast collection of type of different typeface and size. Demonstrations of the various printing techniques are given on the Open days. 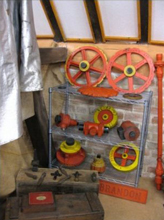 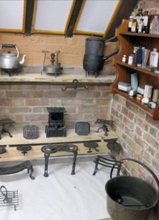 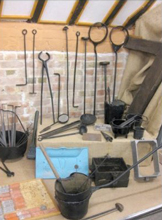 This new collection of artefacts is displayed in a loft which was originally used as a grain store. The loft had been in a neglected state of repair for many years but was converted into a usable space by the museum'

's volunteers when the offer of the collection was made. The vast majority of the collection plus a few artefacts already in the museum are now housed in the loft but the heavier artefacts donated are placed into other displays around the museum. The task of identifying, numbering, photographing and entering every item onto the museum's database was then undertaken, a requirement of the museum's Accreditation status. 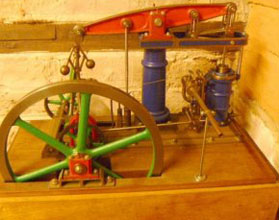 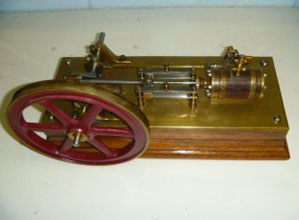 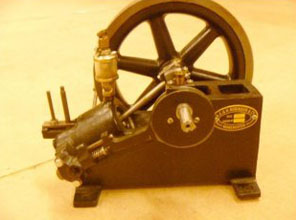 This room been set up as a model engineering room with a display of both models and the machinery used to make those models. 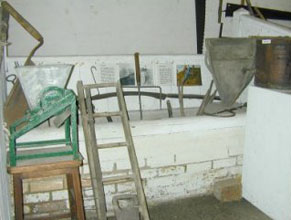 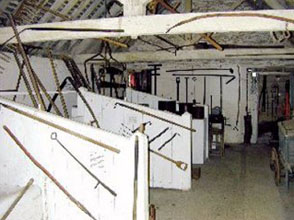 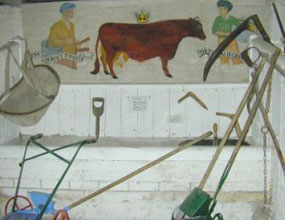 Cows were kept on the farm until the middle of the 1900's when pigs took over all of the farm buildings. Cows were part of the aim to be self-sufficient, which was important to the Hawkins family. Pedigree Lincoln reds were milked in this building, two to a stall. In bad weather they lived in the yard outside. Food for them was grown on the farm and their dung was taken out to fertilise the fields. Butter and cream were made from their milk.

The room now has a collection of farming artefacts that shows how much on the farm went into growing crops to feed the animals, as well as to make a profit for the farmer. Drilling, weeding and harvesting both root crops and grain were hard labour intensive activities, and once the harvest was over, hedging and ditching made the fields safe for the animals to graze. 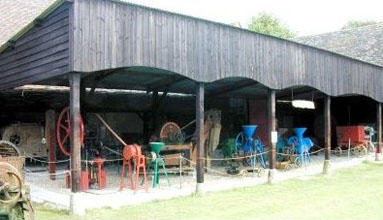 The Black Shed, an open fronted barn, houses a collection of farm machinery, stationary engines and other equipment. Before the introduction of electricity to the farms, the farmers required portable power sources to drive the smaller items of machinery. The engines, referred to as stationary engines, usually ran on petrol or paraffin but some ran on diesel or gas. They were single cylinder, water or air cooled, and would drive machinery by means of a flat leather belt. The machines themselves were often used for processing animal feed, examples being cake crushers, root cutters, winnowers, seed dressers and various forms of grain mills. Cake, referred to cattle cake, very large slabs of commercially made feed that had to be broken down to a usable size.

Winnowers were large box affairs with a fan, driven by a stationary engine or sometimes by hand, that caught the falling grain in the moving air-stream. The grain would fall out at a rate determined by its size and weight and suitably placed cutouts and sieves would then separate the chaff and seeds from the required grain. Working demonstrations of some of these processes are given on the Open Days. 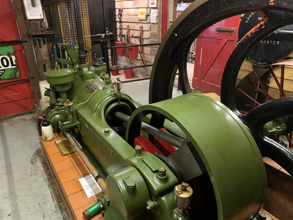 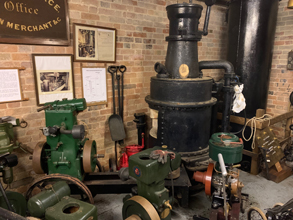 The engine came from Grace's Mill in Akeman Street, Tring. Unfortunately the Mill is no longer in existence having been converted into residential properties in recent years. The Mill dated from about 1750 and the books of the business are held in the archives at Aylesbury. The original family started as Maltsters and corn milling came in as the malting business died. The first power source in those times was horses but later steam was used and one of the engines, prior to the use of internal combustion engines, had a 'coffee pot boiler'. The first Internal Combustion engine was a National Gas engine of about 20HP with twin flywheels.

The Crossley was purchased second hand from a Picture Palace in Kingston-upon-Thames where it had remained unused since its purchase from Crossley's in 1914. It was intended to use the engine for the generation of electric power for the Picture Palace, hence the unusually large flywheel. Thomas Boughton transferred the gas engine to Tring using a steam traction engine. The Crossley engine was installed at Grace's Mill in the winter of 1921/22 and remained in daily service until the severe frosts of 1963/64 burst the big cooling tanks. While new tanks were being acquired the line shafting to the Mill was being operated by a tractor and it was found that the running costs were about half that of the Crossley gas engine, even when operated from the 'Producer Gas Plant' which in itself was considerably cheaper than using town gas. Running the engine on Natural Gas was also considered, although in the end the engine was retired and replaced by four cylinder Dorman Diesel engine.

The Gas Engine provided all the motive power to the Mill from line shafting, which in turn drove twin pairs of 'four foot' mill stones together with Oat Crushers, Oat Clippers, Mixers and all other equipment used at the Mill. Also driven from the line shafting was the Dynamo that provided all the electrical power to the Mill. The electrical power plant consisted of a bank of accumulators that were charged by a Dynamo to maintain a voltage of 110v DC. The original Dynamo and Control panel are now back in operation on the engine. Unfortunately the accumulators were scrapped when the engine was moved from the Mill and we now have only a token number of replacement accumulators connected up for demonstration purposes.

The engine was started by hand using 'Town Gas' and then switched over to 'Producer Gas 'after a few minutes running. It originally required two men to start the engine but the last owner, Bob Grace, had developed a method of starting the engine by himself, after the acquisition of a petrol primer/starter, a cord and a lever were rigged up to trip the Magneto at the appropriate time as the flywheel was rotated.

The Producer Gas Plant now resides alongside the engine and was the last of many used with the engine as they tended to corrode away very rapidly. This last one was made by Hornsby Stockport in 1913. The gas was produced by passing steam though red hot 'pea sized' anthracite, where the steam reacted to produce various combustible products. In the 1920's when times were hard, the anthracite was purchased direct from the South Wales collieries and collected from Tring Railway station by horse and cart. A wagon load cost £8.00 and undercut the local coal merchants, much to their annoyance.

The Gas Plant was called a 'Suction Gas Producer Plant' as it was the suction of the engine that drew the steam and the air over the anthracite. The greater the suction of the engine, the more gas was produced. When starting up, a blower was used instead, until the gas produced a clean blue flame from a test cock on the expansion tank near the engine (no longer fitted). The gas from the anthracite was hot and dirty with bitumen products. Before use in the engine it was passed though a washing tower containing running water and coke, mounted alongside the anthracite burner, prior to passing into the expansion tank near the engine. The furnace containing the anthracite was water-cooled, the cooling water in turn producing the steam for feeding through the anthracite to produce the gas. Although the gas plant is beyond restoration we have brought it inside the engine house, alongside the engine, to show the complete plant.

The engine had laid dismantled at Pitstone for some 20 years, when the Beds & Bucks Stationary Engine Club undertook the restoration of the engine and creating an engine room from part of an open barn. Work started in 1992 and the engine was running within 2 years. Members of the Pitstone & Ivinghoe Museum Society now maintain the engine and runs it on the public open days.

The meeting room was once stables for housing the farm horses. When horses disappeared from the farm, it was used as a store room and remained like that until the Pitstone & Ivinghoe Society volunteers transformed it into the present meeting room. The brick walls and ceiling beams were water/abrasive pressure washed to remove all the old grime, a new floor covered the original cobbled stable floor and fitted out as you see it today. Many of the old stable features including the manger and the hay racks have been retained. 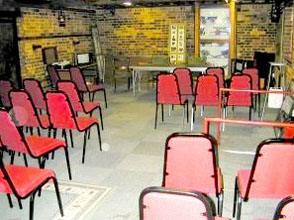 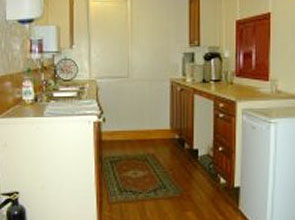 The room is used for society meetings(meetings / talks are held monthly on the fourth Thursday of the month), for exhibits on the museum open days and a meeting room for adult groups visiting the museum, if required. A small kitchen with basic facilities is adjacent to the main room.

For further details of the Pitstone & Invinghoe Museum Society and how to join in, please visit (PIMS). 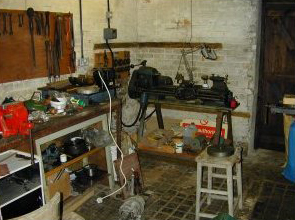 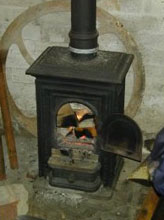 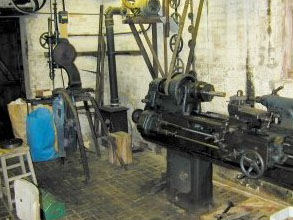 The farm workshop was originally used as a stable to house the horses which pulled the chaise (a lightweight cart used by the family to go to market). Their tack cupboard (harness for the horses) was fixed to the wall over where the large lathe tail stock is now. It is not known when the horses and tack cupboard were moved out. The farmer, Jeff Hawkins, found he needed workshop space to work metal in association with the silo project (see details elsewhere on this site) and the room in the photos is the room he chose for it. He blanked off the doorway into what is now the Museum Meeting Room (at that time it was stabling for draught horses) and opened up a new doorway at the rear, into a second workshop. The two rooms together became the farm workshop, and increasingly mechanical maintenance of all types was carried out in there.

The first equipment acquired was oxy-acetylene welding and cutting gear (regrettably no longer with us). This was followed soon afterwards by the second hand lathe, drill and a double wheel grinder, all powered by an electric motor via belts and line shafting typical of the pre-war era. The grinder has been moved elsewhere on the site in favour of a second, smaller lathe of the same period. An attempt is being made to preserve the workshop as Jeff Hawkins built it, whilst continuing to use the equipment for restoration and maintenance work in the museum. The electrical system in the workshops was well past its' sell by date' and had to be completely restored. This led inevitably to some loss of character of the workshops, but attempts have been made to minimise this.